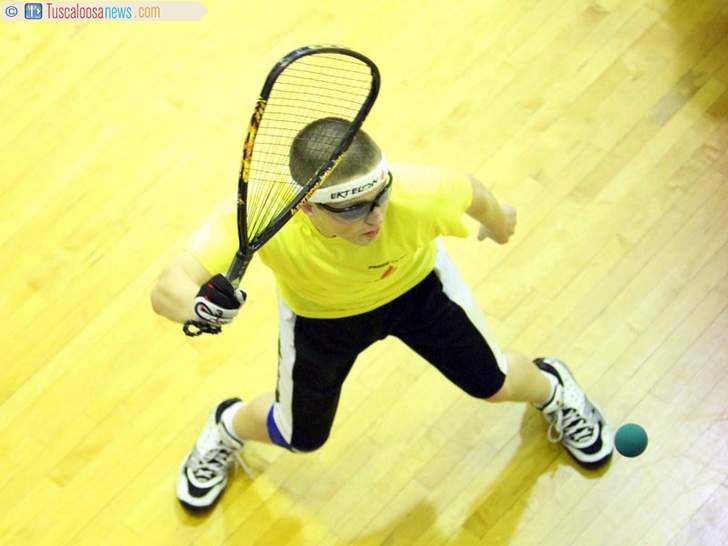 This article originally appeared in the Tuscaloosa News on February 6, 2013.

TUSCALOOSA | He plays a sport that is fast-moving and hard-hitting. Those descriptions also fit the way 17-year-old Robert Hemphill approaches his training, a regimen that has made the Fosters native not only one of the best racquetball players in the state and region, but soon enough, he hopes, the country.

He learned to play from his mom, Ann, a competitor and racquetball instructor who would bring him with her to the courts when he was just a toddler and had him taking classes when he was barely 5.

In the past year alone, he won the 2012 state championship for boys 16 and under and the Men’s A division in singles as well as Men’s A Doubles. In April, Hemphill won the Men’s Elites at regionals in Atlanta. In June, he won the Boys 16 Blues and finished ninth overall in singles and fifth overall in Boys 16 doubles at junior nationals in California. He finished second in the Men’s Open in Birmingham in August, and in September he advanced to the semifinals of the Men’s Open in Atlanta.

Last month, Hemphill turned heads when, seeded 25th among a field of 30, he finished second in singles at the Longhorn Open in Texas. Hours before doubles play, he found a partner, and the first-time duo advanced to the quarterfinals of the Men’s Elite Doubles. In March, he’ll return to the state championships, where he will compete in the Men’s Open Division.

In Texas he was introduced to top-ranked pro Kane Waselenchuk, who joked upon meeting Hemphill, “Make sure you spot me because I’ll be older when you play me.”

Hemphill’s success is owed to talent, but it’s also drawn from a work ethic he’s designed to bring out the best of his talents. He’s cut down on teenager staples such as pizza and hamburgers, and is eating healthier. That, he says, has made him lighter and quicker. He runs 4 miles Mondays, Tuesdays, Thursdays, Saturdays and Sundays, lifts weights Tuesdays and Thursdays, takes spin classes Tuesdays and Thursdays then plays racquetball Mondays, Wednesdays and Fridays.

“When I was 12, 13, maybe 14, I was kind of out of shape. I could shoot the ball pretty well, but I was kind of slow,” Hemphill recalled. “I would tire by the second or third game. Second game of the tiebreaker — I’d pretty much be done. Once I hit high school, I started working out really hard. Now I almost enjoy going to that tiebreaker game because I know I have an advantage because I’m fresh. I can get to a lot more balls.”

Known for his backhand and his backhand shot off the wall, the USA national team hopeful said his on-the-court demeanor is passionate, “but I’m not going to throw a chair or Bobby Knight at you.

“There’s just something special about going after a ball and hitting it,” the Holy Spirit junior said, “and two guys or four guys if it’s doubles, going out and giving everything they’ve got to win the game.”