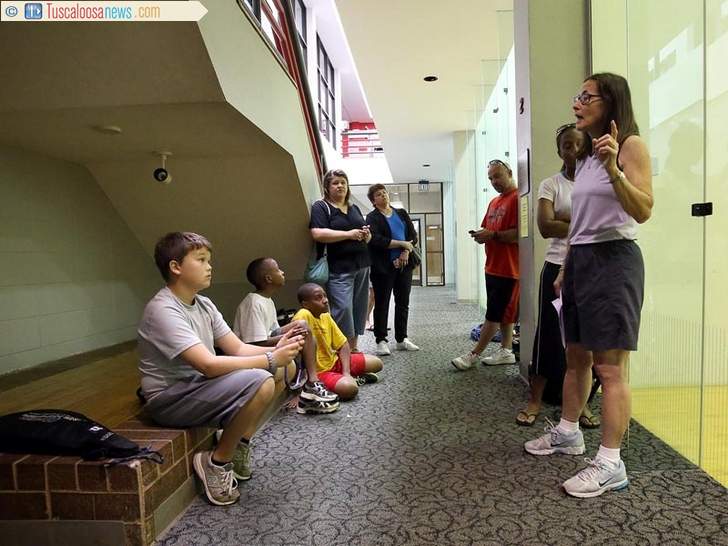 This article originally appeared in the Tuscaloosa News on June 1, 2013.

By Danielle Walker
Special to The Tuscaloosa News

NORTHPORT | The annual “RUMBLE” racquetball camp is under way at Fitness One.

The camp was started by Jack Sorenson in 1990 and prepares young athletes for competition at the Junior Nationals. The camp has boasted many junior national competitors and ranked players over the years, including three current state and nationally ranked players from Alabama.

“The camp is to help kids learn and play elite racquetball, learn sportsmanship and prepare for Junior Nationals,” said Ann Hemphill, racquetball coordinator at Fitness One.

The camp eventually expanded from Montgomery to Birmingham to where it is currently held in Tuscaloosa, where the University of Alabama racquetball team hosted and helped coach the camp. Many UA players had previously attended the camp before competing at the collegiate level and former players like Allan Crockett, continue to coach young RUMBLERS.

“The camp meant so much to me and I want to give back to the kids,” Crockett said.

Crockett has been playing racquetball for 16 years and has helped coach at the camp for four years. He attended RUMBLERS as a camper for ten years.

Eight southeast based racquetball players whose ages range from 9 to 17 are attending this weekends camp in preparation for Junior Nationals. Some campers, like 12 year-old Bryce Macks, have played racquetball for only one year.

Macks said he enjoys racquetball because of the adrenaline he gets when he plays.

Robert Hemphill, 17, has been playing racquetball for 11 years and is currently ranked No. 1 in the state of Alabama and 20 nationally. He learned to play from his mom, Ann Hemphill. Hemphill attended Junior Nationals last year and plans to go far in this years competition.

“I hope to win (Junior Nationals) and go to Worlds. That’s a dream of mine,” Hemphill said.

While most campers come from Alabama, some come from other southeastern states, like Louisiana. Tyler Hernandez, 17, of New Orleans has only been playing for one year but hopes to make it to Junior Nationals and “definitely make it far.”

“My brother won Junior Nationals and came to RUMBLE and said it was good at helping with your game,” Hernandez said. Hernandez hopes to have fun and improve during his time at the camp.

Besides improving their game this weekend, campers will learn good sportsmanship, make new friends and focus on work outs specifically for racquetball.

“Our main focus is fair play and sportsmanship,” Hemphill said “Our campers get a good mind set and learn to be a winner. They will also learn the skills and mental capabilities to get to the next level.”

The highlight of each camp is a cookout at the Alabama racquetball team academic sponsor’s, Robert Griffith’s house.

Instructor Ann Hemphill, right, talks with class participants at The Rumble, a summer racquetball camp at Fitness One in Northport.