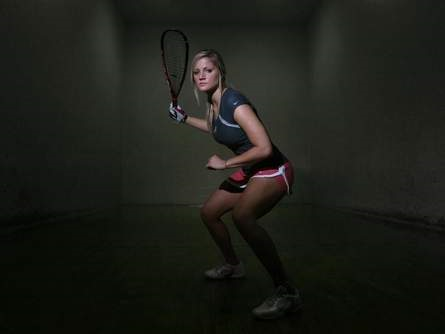 One example of this is from the November 29, 2010 edition of the Tuscaloosa News website.

TUSCALOOSA | She holds a world championship, 21 national titles, a spot on the USA national team, two collegiate national championships and two states claim her as their champ.

And yet Sharon Jackson wonders how good she could be if only there were more hours in a day.

“I don’t have time to practice because I always have schoolwork,” said the 21-year-old member of the University of Alabama’s racquetball club team. “I keep thinking if I had no school and about six months time to concentrate on practice, I could be so much better.”

How good is Jackson now?

“If you were gauging her on a scale from 1 to 10, she’s definitely a nine-and-a-half to nine-and-three-quarters,” said Marcus Riggins, who has coached her on both the USA Junior National Team and at Alabama. “In her sport, if you say her name, Sharon’s in the same realm as an Anna Kournikova or the Williams sisters (Serena and Venus). She’s right in there. She’s a fierce competitor. There are not too many people who do not know her nationally and internationally because in her juniors career she’s made the U.S. junior team every year she’s played and she’s our No. 1 player right now on our Alabama team.

“Her second year, she won the women’s division and represented the United States as one of the collegiates. I can’t say enough about her. She’s a hard worker. She puts in a lot of time and effort. … When you get that girl on the court, that girl is the most aggressive, most tenacious player you can imagine. She’s going to go 150 percent more until she leaves everything on the line. She constantly comes at you all the time. It’s non-stop. She puts the pressure on. You can’t give her opportunities, because if you give her opportunities you’re going to pay for it.”

A routine slayer on the court of both male and female opponents, the Shelbyville, Ind., native has a serve that averages 120 mph. Her serves and her forehand are her forte.

Jackson is the 2006 World Champion in 16-under doubles, the 2006 world singles silver medalist and is an eight-time All-American, a seven-time Indiana state champion, a two-time Alabama state champion and the 2010 and ’09 intercollegiate national champion in both singles and doubles.

Jackson was silver medalist at the National High School Championships and won gold in mixed doubles. She’s currently a member of the USA Adult Racquetball Team, and was the 2008 USA Racquetball Female Junior Athlete of the Year.

“Winning worlds in doubles was probably my favorite win,” said Jackson, who won in Bolivia as a 16-year old. “We were down 9-1 in the tiebreaker. My USA coach took me aside and said, ‘You’ve trained so hard. You’re going to have to go out there and win this. You’re going to go out and win this.’ And I just went out there, and I don’t think they scored again.”

Jackson started playing racquetball at age 5, tagging along with her mom, who played for fun. Jackson played six sports at Waldron High School, earning all-conference honors in volleyball, basketball and tennis. She was also on the soccer and track teams and was 2008 student council president.

Armed with academic scholarships from her high marks in the classroom and with friends on the UA team, she enrolled at Alabama and joined the team.

“I’d been going to Alabama’s racquetball camp since I was 12, which was right around the time they started a team here,” said Jackson, who turned pro by age 16. “I think a whole bunch of them at world’s one year decided they’d all go to Alabama and start a team.

“They are all talented here. It’s definitely helped me, especially getting to play the better guys. They make me a better player.”

She will graduate in May, 2012, in general business, with a specialty in health care management. Jackson hasn’t yet decided if she’ll play professionally full-time before settling into her career, but she has set goals.

“I want to be No. 1 in the WPRO,” said Jackson who currently ranks No. 24 in the Women‘s Professional Racquetball Organization and No. 10 by the U.S. Racquetball Association. “I think I can do it before I leave here. I just have to have time to practice.”