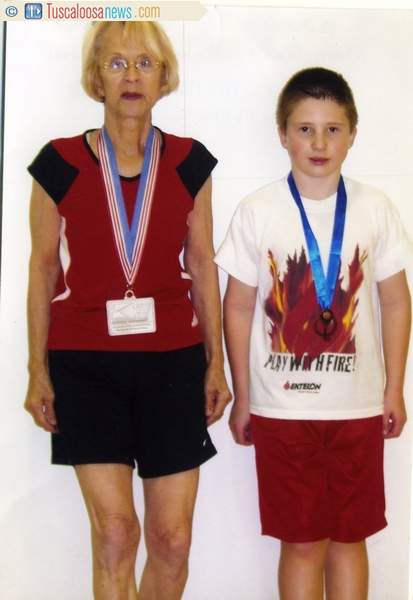 This article originally appeared in the Tuscaloosa News on February 13, 2007.

By Michael Kerekes
Special to the Tuscaloosa News

TUSCALOOSA | Julio Franco is a 48-year-old major league baseball player who batted .273 for the New York Mets in 2006. Michelle Wie is a professional golfer who has yet to graduate from high school.

The obvious lesson to be learned from both of these examples is one is never too old or too young to play a sport.

A Tuscaloosa resident would not have to look far to find two local examples of this lesson in Mary Fish, 76, and Robert Hemphill, 11, two racquetball players who recently won medals at international competitions.
Fish won the silver medal in the 75-plus singles competition bracket in the United States Racquetball Association’s (USRA) U.S. Open Racquetball Championships in Memphis, Tenn., this past November. Hemphill won the bronze medal in the International Racquetball Federation’s (IRF) 18th World Junior Championships in Tempe, Ariz., this past December.
Fish competed in the U.S. Open tournament Nov. 15-19. Her age bracket, the 75-plus competition, consisted of only her and Lola Markus, 75, of Illinois.
Fish had competed against Markus in the 2004 U.S. Open and lost. In their second face-off, Markus again came out the victor, which delegated the silver medal to Fish. She claims Markus’ superior speed enables her to win every time they face off.
“The only reason I can’t beat her is because I’m a year older,” Fish joked.
Hemphill, still slightly too young to compete for the USRA, played in the IRF’s Junior Championships Dec. 16-21. Despite being 11, he competed in the boys 10 and under doubles bracket due to a technicality. Hemphill was paired up with Conlon Berry of Columbus, Ohio.
—
Mary Fish won the silver medal in the singles competition of the USRA U.S. Open Racquetball Championships in November while Robert Hemphill took the bronze in the IRF 18th World Junior Championships in December.