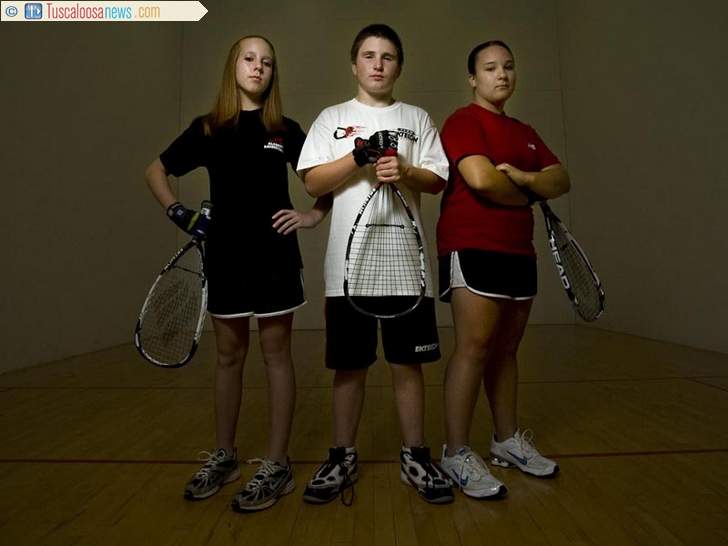 This article originally appeared in the Tuscaloosa News on June 2, 2009.

Bethany Smith, 12, left, Robert Hemphill, 13, and Jessica Smith, 14, right, pose for a portrait at Fitness One in Northport, Ala. Saturday, May 31, 2009. The three youths will be competing in the Junior National racquetball championships.

TUSCALOOSA | Robert Hemphill is only 13, but already he’s a bit of a legend.

Locally, he’s known as the kid you don’t want to play a pick-up game with if you’re a grown man whose ego can’t take losing to a kid.

Nationally he’s known as the racquetball player from Tuscaloosa who has been a regular fixture at the USA junior nationals since he was six.

On June 24-28, Hemphill and Tuscaloosa sisters Jessica and Bethany Smith will be in East Lansing, Mich., participating in the USA Racquetball Junior Olympic Championships.

It will be the first appearance at nationals for the Smiths and the eighth for Hemphill. The trio is coached by Hemphill’s mother, Ann Hemphill, and train at Fitness One.

Finalists in their divisions in singles and the winners in doubles will qualify for a position on the Junior USA team.

Hemphill first took racquet in hand when he was five.

‘It was fast and fun,’ Hemphill said of what initially drew him to the non-traditional sport. ‘I started competing at nationals when I was six because somebody I knew went to nationals and told me I needed to go to nationals, so I decided to go.’

He said he didn’t remember much about his first trip. He does know that he has improved since then.

Hemphill, who will be an eighth-grader at Holy Spirit this fall, competes mostly against adults and has been sponsored by Ektelon since he was eight. He ranks No. 18 nationally.

He’s known for his power, backhand, and low shots and ability to read his opponent, having medaled on every trip.

‘I’ve been so many times to nationals, I know my opponent, and, if I can’t recognize him, then that means they’re probably not that good, so then I usually beat them easily,’ said the No. 1 ranked player in Alabama in his age group. ‘I guess what makes me good or helps me win against the older players is because I’ve played since an early age and it just comes naturally to me.’

Hemphill followed his mother, a former Auburn club player who still competes, into the sport.

The Smith sisters followed their dad onto the courts. Jessica is ranked first and Bethany second in the state and both are among the top 40 nationally, making them, perhaps, racquetball’s answer, at least in Alabama, to tennis’ Williams sisters.

Bethany’s strength is speed. Jessica’s is power. The two, both state champions, are part of a group of about 30 area home-schooled youth who play. Jessica, 14, is going into 10th grade. Bethany,12, is going into eighth grade.

‘My dad played when he was in college, and, I didn’t really want to do it at first. But he really wanted me to play, so I tried it,’ Jessica said of her start around age nine. ‘I really had a lot of fun once I started playing.

‘I started competing about two years ago. I liked it because it was new competition instead of playing the same people in class over and over again. It’s better to play somebody different so you can get better.’

Bethany was eight when she started playing and began competing two years ago as well.

‘I didn’t really like it at first, the balls coming at you all different ways. It’s just hard,’ Bethany said. ‘But it was fun, the exercise and everything. I really like it now.’

Having one another to train with has elevated their games.

‘Jessica has power, and it’s a big challenge to play someone with power. And my speed helps her,’ Bethany said.

The sisters said making their first trip to nationals is easier since they are sharing the experience together and with Hemphill.

‘I’m kind of nervous about it, but I just have to keep a positive attitude and hopefully I will do OK,’ Jessica said.

‘I’m nervous but I’m just going to try to do the best I can,’ Bethany said. ‘It helps me that Jessica will be there with me.’