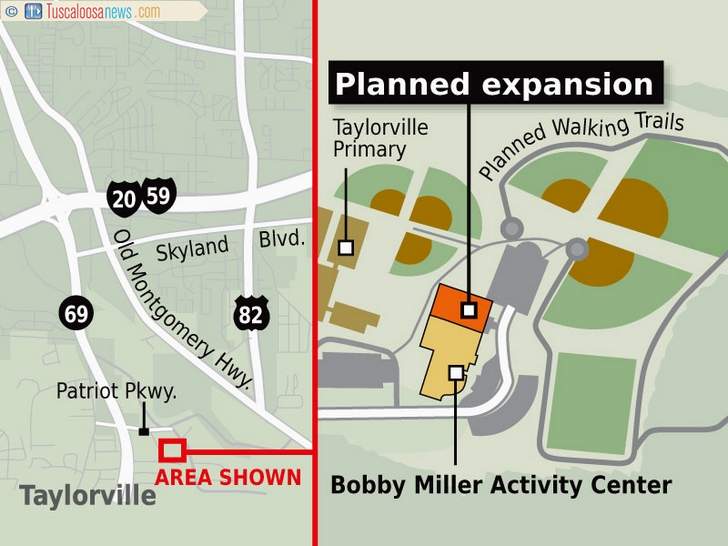 This article originally appeared in the Tuscaloosa News on January 18, 2014.

The Bobby Miller Activity Center in the Taylorville community will soon get a $1.5 million, 9,600-square-foot gymnasium addition that will include racquetball courts.

A second gym was part of the plan when the activity center was built in 2006, but it was not constructed because of financial constraints, said Gary Minor, executive director of the Tuscaloosa County Park and Recreation Authority. At that time, the footings for the expansion were put in place so that it could easily be added later, sharing the wall of the existing gymnasium.

The Tuscaloosa County Commission set aside $1.5 million for the second gym last year, and bids for the project will be sought within the next 60 days, Minor said. Construction should take about nine months, he said.

“We are hoping the entire project is done by the end of this year,” Minor said.

Although the plans originally called for a second basketball gym, a community poll showed a desire for something different, Minor said. Instead of a basketball court, the new gym will be home to three racquetball courts, a rock climbing wall and an indoor play area that will be home to inflatable bouncy houses for kids, a possible foam pit and perhaps even a zipline where people can glide across the play area.

“I’m tickled to death because the demand is there, not only for the indoor play area but for the racquetball,” said County Commissioner Bobby Miller, for whom the center is named.

It will be the first activity center in the county to feature racquetball courts. Minor said the racquetball courts are in high demand in Tuscaloosa. The University of Alabama Recreation Center has them, but there is often a waiting list for use by members, he said.

“This is going to be an awesome addition,” Minor said. “This will be special and something the community doesn’t already have.”

The gymnasium addition will the second major upgrade to the Bobby Miller Center announced in the past year. The county has already received more than $500,000 in grants to fund construction of walking trails at the center. Each will be about one mile long. One trail will extend from Alabama Highway 69 to the center, and the other will wind around the facility’s ballfields and through a wooded area. That work is expected to get underway early this year.

Once completed, the expanded Bobby Miller Center will be about the same size as the Faucett Brothers Activity Center off Alabama Highway 171 near Northport. The Faucett Brothers Center, which opened in 2013, is about 55,000 square feet and is the newest of PARA’s six activity centers.