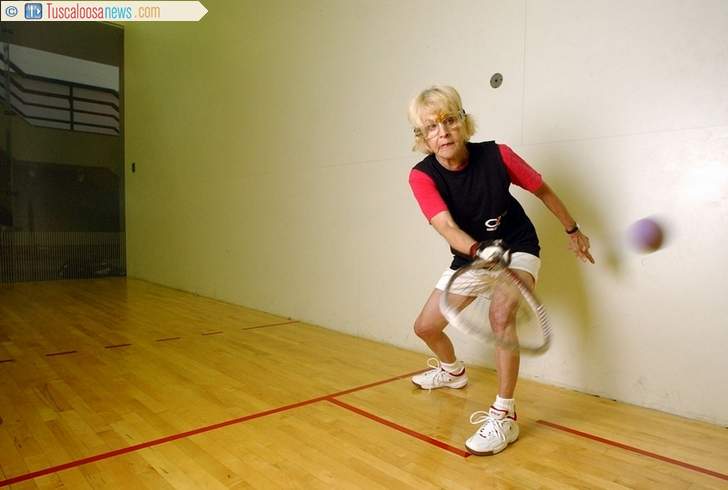 This article originally appeared in the Tuscaloosa News on June 27, 2006.

The retired University of Alabama economics professor took up the sport 15 or 20 years ago, and she is now the nation’s top-ranked women’s player in the 75-and-over division. Fish, however, downplays the high rating.

Fish, who turns 76 next month, is also ranked No. 3 in the 70-and-over division. Considering she never even picked up a racquetball racquet until she was in her 50s, that’s a pretty outstanding accomplishment.

“I grew up in Minnesota,” she said. “There you swim and you skate and you ski. I played hockey and did all those things you do in Minnesota.”

Fish isn’t the only local racquetball player making an impact on the national scene. The U.S. Racquetball Association’s women’s rankings include three local players in the top 30 — No. 10 Adrienne Fisher, No. 27 Kelley Fisher and No. 29 Da’Monique Davis. On the men’s side, Agustin Tristan is ranked No. 27 by the USRA.

“It’s amazing that there is a [racquetball] community here, and it’s great fun,” Fish said.

Fish’s first foray into racquetball came sometime during her 33-year teaching career at Alabama. She took to racquetball as a recreational activity at first and was soon hooked.

“I had a friend who played and it just seemed like fun,” she said.

Fish competed in the sport’s national championship tournament, which crowns a champion in each age group on the men’s and women’s sides, in 2004 in Memphis. She plans to play in it again this November. Finding competitive matches is nearly impossible for a senior women’s player, so Fish’s tournament opportunities are few.

“I just go to the nationals,” she said.

For local competition, Fish reaches into a much younger age group.

Her coach, Ann Hemphill, teaches a class for beginners at Fitness One in Northport, and Fish is able to pick up opponents for matches there. She said her playing partners range in age from 5 to 13.

“I play with them,” Fish said. “It’s very discouraging. They start out and they can’t hit the ball, and in three or four weeks they’re beating me.”

Fish doesn’t play for glory, but for the enjoyment she gets out of the sport.

“Probably the most fun about racquetball is it’s a fast game and it’s a forgiving game,” she said. “The people who play it don’t take winning or losing very seriously unless it’s tournament time, but you have to be prepared to get hit with the ball and you have to not be afraid.

“I like it better than tennis and things of this sort simply because it’s faster.”