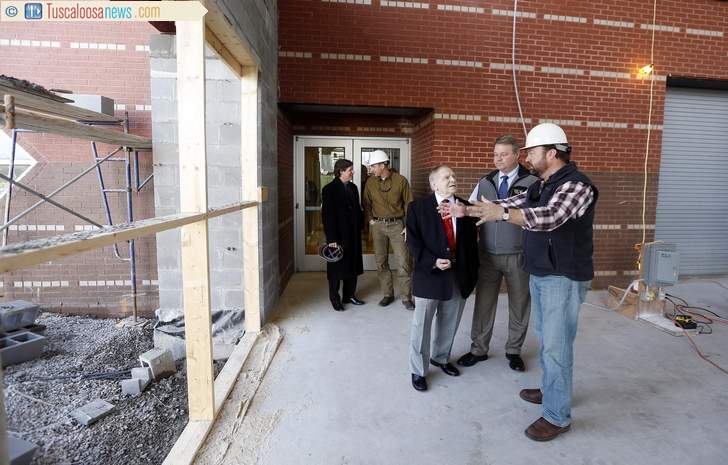 This article originally appeared in the Tuscaloosa News on December 17, 2014.

The Bobby Miller Activity Center in Taylorville will soon feature everything from a rock-climbing wall to racquetball courts to a multistory indoor playground.

On Wednesday the Tuscaloosa County Commission unanimously approved $597,000 out of its reserves to furnish an addition to the activity center. The 11,000-square-foot addition, which is under construction and set to open in March, will expand the activity center to around 50,000 square feet, making it the second largest in the county, said Gary Minor, executive director of the Tuscaloosa Park and Recreation Authority.

The money will also be used to buy some updated workout equipment for the center and allow free aerobics classes for members. A party room will be located near an expansive indoor playground area, and the two racquetball courts will be the only public courts available in Tuscaloosa County, Minor said.
The improvements were chosen based on community input, Minor said.
If the building included only a gym, the furnishing cost would have been around $300,000 instead of close to $600,000, but Minor said he expects the new features to attract more users and more money.
Commissioner Bobby Miller, for whom the center is named, agreed.
“The commission worked with PARA real well to make this happen,” Miller said. “I’m tickled to death.”
The new amenities will mean a higher cost for users, Minor said. Although PARA has no exact figures on rate increases, rates will likely increase similar to what users pay for the Faucett Brothers Activity Center in Northport.
Faucett members pay $360 a year on average to use the facility. Bobby Miller members pay $150 a year and can use all other centers in the PARA system except for the Faucett Brothers at no additional charge.
“We will probably have to go up on fees, and grandfather in existing members for a while,” Minor said. “It’s a necessity to generate enough revenue for the cost of operation.”
Once the addition is open, the Bobby Miller Center will feature the same amenities offered at the Faucett, Minor said. PARA also hopes that means the Bobby Miller Center will make enough to be self-sustaining like Faucett.
Currently, the Bobby Miller Center operates at a $200,000 loss each year. But, with more amenities, more people using it and a higher membership fee, Minor said the center would save the county money.
“If we can get anywhere close to the Faucett Brothers numbers, then we’ll get this (furnishing cost) back in two years and the center will cost less over time,” Minor said.
County Commission Chairman Hardy McCollum wasn’t happy that the financial request came in the middle of the budget year.
“That’s part of my problem going forward, is that you are coming back in the middle of the budget year and asking for more,” McCollum said. “But, we’ve built the facility and got to equip it to make it usable, I understand.”
The construction cost of the addition — $1.5 million — was approved by the County Commission last year as part of a list of county-only recreation projects. The addition was originally part of the Bobby Miller Center’s plans when it was constructed eight years ago but was delayed due to cost.
Reach Lydia Seabol Avant at lydia.seabolavant@tuscaloosanews.com.