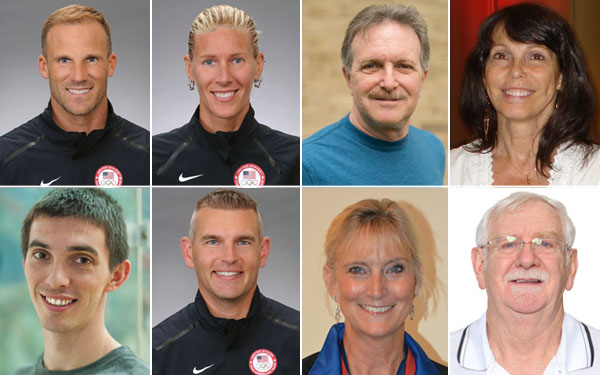 Colorado Springs, Colo. – USA Racquetball today announced its 2016 Annual Award winners.  These individuals have achieved great success both on and off the court. They will be honored at the Hall of Fame/Annual Awards Celebration and Player Party on the evening of Saturday, May 28, during the U.S. National Singles Championships in Denver, Colo.

Carson, 36 of Ladera Ranch, CA is receiving this award for a record sixth time.  Highlighting Rocky’s year was his Gold Medal in the 2015 Pan Am Games, where Rocky became the first man to come out on top in two Pan Am Games.  Carson made it to the semifinals at the UnitedHealthcare US OPEN and, with partner Jansen Allen, finished second at this year’s U.S. National Doubles Championships.  After winning the Singles U.S. Team Qualifying division at National Doubles, Carson leads all men in qualification points heading into National Singles.

Rajsich, 37, of Phoenix, Ariz., continued to dominate national and international play among Americans over the last year. She is receiving this award for the eighth time. Rajsich won the 2015 U.S. National Singles Championships and earned a bronze medal at last year’s Pan Am Games in Canada. As the runner-up at the 2015 U.S. OPEN, she was the top U.S. finisher.  Along with partner Sheryl Lotts, Rajsich took the Silver Medal at this year’s National Doubles Championships.  After winning the Singles U.S. Team Qualifying division at National Doubles, Rajsich leads all women in qualification points heading into National Singles.

Baron, 63, of Herndon, Va., is winning this award for the first time.  Baron had an outstanding year, capturing the Men’s 60+ title at the 2015 UnitedHealthcare US OPEN and winning the Men’s 55+ Doubles at the US OPEN, the 2016 U.S. National Doubles Championships, and the 2016 NMRA National Championships.  His doubles partners, respectively, were Mike Grisz, Dave Azuma and William Hartwell.

Receiving this award for the second year in a row, Tilbury, 57, of Malibu, Calif., participated in a broad cross-section of national events with outstanding results. She won a Gold Medal in the 55+ division at last year’s U.S. National Singles Championships and added a Silver in the 50+ division.  At the 2015 UnitedHealthcare US OPEN, she took second in the Women’s 55+ Singles divisions and won Silver with partner, Vicki Birkmann, in 55+ Women’s Doubles.  She went on to add two more Gold medals at the 2016 National Masters Racquetball Association Championships in Women’s 45+ Doubles (with Karen Turner) and Mixed 55+ Doubles (with Doug Kite).

Horn, 26, is well known for his demeanor and fair play both on and off of the racquetball court.  A two-time member of the U.S. National Team, Horn consistently demonstrates fair play even in tightly contested top-level matches.  He can often be observed personally thanking his opponents and the referee, as well as line judges and his opponents’ coaches.

Brent Huff has served as the volunteer Trainer for the U.S. National Team since 2012.  In this role, he spends many days at a time away from his paying job and family.  Huff tirelessly supports the Team through treatments, taping, therapeutic massage and consultation on diet, fitness and readiness to play.  An open level player himself, Huff knows firsthand the issues and challenges faced by National Team members.  He brings a positive attitude to the delegations and his friendliness and sense of humor are infectious, giving Team members a valuable lift.

Jody Nance has served as both a volunteer Trainer and Coach for the U.S. Junior National Team since 2013.  She has attended Team Training Camps and Junior World Championships over the past three years and helped ensure that all of the 20 plus athletes are in the best shape possible to compete for TEAM USA.  With her experience helping to develop top players over the years, including Jose and Marco Rojas and Jose Diaz, she also works double-duty as a coach for the Junior National Team.  Nance has given a great deal of time away from work and family not only over the past three years, but going back many years with junior player development in the Stockton area.

Frazier has served on the Alabama Racquetball Association Board for 13 years, 9 of those as President.  He has led Association efforts to support junior players playing in the National Junior Olympics and programs to support junior membership fees and racquets for young players.  He is personally involved in the conduct of Alabama state championships and runs other sanctioned events at his home club, the Athletic Club of Alabama.  Frazier also mentors new event directors and has helped increase the percentage of tournaments in Alabama that are sanctioned with USA Racquetball.  The Alabama Racquetball Hall of Fame member has attended two USA Racquetball Leadership Conferences and contributes regularly on state association conference call.  Frazier is sure to credit his fellow Board members and Alabama Racquetball Association members for the shared accomplishments that have led to this recognition.

About the USA Racquetball Annual Awards

Founded in 1974, the USA Racquetball Annual Awards recognize outstanding play on the court as well as contributions off the court. More information, including the nomination process for certain awards, can be found at USARacquetball.com.

USA Racquetball, founded in 1969, is recognized by the U.S. Olympic Committee as the National Governing Body for the sport. The organization annually conducts six national championships and sanctions hundreds of tournaments for players of all ages and skill levels. USA Racquetball also organizes the Adult and Junior National Racquetball Teams, oversees the Official Rules of Racquetball, administers National Player Rankings, manages a college scholarship program, and supports the introduction of new players to the sport.  USARacquetball.com; Facebook.com/USARacquetball